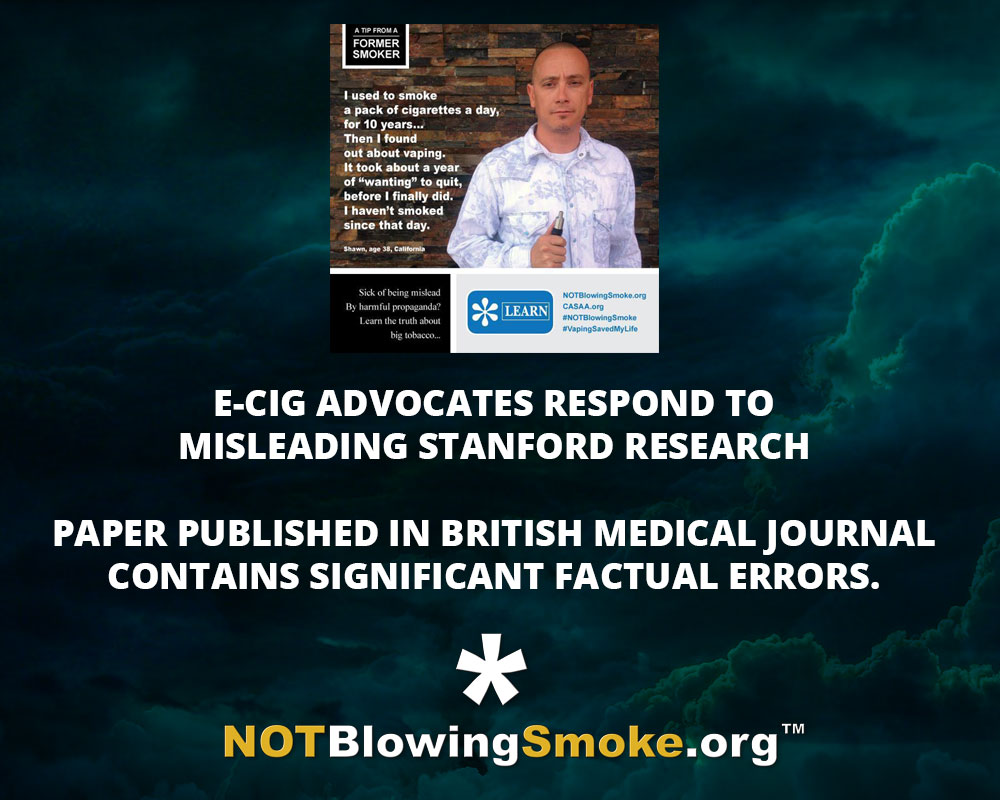 Oakley, CA – A new research paper from Stanford Research Into the Impact of Tobacco Advertising, published in the British Medical Journal, raises serious questions about the university’s use of research funds. The paper, authored by Stanford professor Dr. Robert Jackler, makes accusations of “brandalism” – manipulating an existing work to convey a different message, a tactic often used in anti-tobacco advertisements over the past two decades.

Dr. Jackler asserts in the paper that Not Blowing Smoke, a California-based e-cigarette advocacy group, engaged in a deliberate effort to modify advertisements created by the Centers for Disease Control and Prevention as part of their Tips From Former Smokers campaign. In addition, Jackler accuses Not Blowing Smoke of having “close ties to the e-cigarette industry” and being founded by “four creators, including an e-cigarette company marketing manager (Apollo) and vape store employees.”

“I was completely confused by this research. Two of our three board members have no affiliation with the vaping industry and none of our team members work in a vape store,” said Stefan Didak, founder and president of Not Blowing Smoke. “Stanford’s research team clearly missed a few things in their review, most importantly that we didn’t create any sort of counter-campaign to CDC.”

In fact, the originator of the edited images is a graphic designer named Shawn Rego, who created the modification based on a poorly-worded CDC advertisement he felt was misleading the public. The ad, featuring a woman with a scar from surgery, implies that e-cigarettes were somehow responsible for a collapsed lung despite the clear statement that ‘Kristy’ continued use of combustible tobacco products. Ironically, Stanford’s paper makes note of the fact that identifying the author of a knock off advertisement may be challenging. 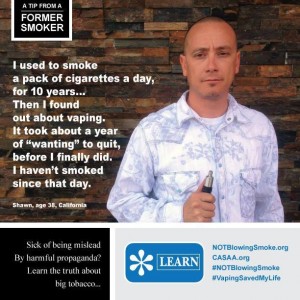 “Jackler alleges that the modified work infringes on CDC copyright, but as part of the federal government, it’s unlikely that copyright protection applies,” adds Didak. “We certainly shared images via social media. The backlash against CDC’s misleading campaign was completely a consumer-driven effort that we were happy to support.”

Of particular note is Stanford’s bizarre accusation of industry ties. Not Blowing Smoke’s board is comprised of three people, two of whom have never been employed by the e-cigarette industry in any capacity. “At any given time, a majority vote is controlled by consumer advocates,” says Jason Downing, the organization’s treasurer and communications director. “We operate with complete independence from any e-cigarette manufacturer, wholesaler or retailer. We believe this paper falls far short of Stanford’s long history of producing and publishing fine research both in the tobacco control field and many other areas of medicine.”

Not Blowing Smoke has sent formal letters in response to the research to Dr. Jackler as well as leadership at both Stanford and the British Medical Journal calling for a retraction.

About Not Blowing Smoke:

Not Blowing Smoke is a nonprofit corporation formed in response to the California Department of Health’s misleading anti-vaping campaign, which to date, has spent upwards of $15 million dollars of taxpayer money. The organization was founded in March 2015 by Stefan Didak, a nationally recognized consumer advocate for vapor products with assistance from Jason Downing. Shortly after founding, Danielle Bloss, a brand manager at Apollo, joined the team and the three now form the board of directors.

We are dedicated to providing the public and government officials with the truth about vaping. Not Blowing Smoke operates completely independent of industry influence, although we do receive limited funding from strategic partnerships.

In reviewing your recent paper, published in the British Medical Journal, Not Blowing Smoke (hereafter referred to as NBS) felt it important to reach out to Stanford to address portions of the document directed toward the organization.

We wish to address allegations regarding the so-called brandalism of CDC’s Tips From Former Smokers campaign. “Identification of the original author of the knock off may be challenging, as it has become very easy for even those with minimal digital graphic skills to create derivative advertisements.” In fact, the originator of the edited images is a California-based graphic designer named Shawn Rego. The catalyst for the original modification was an image created by CDC (Fig. 1) intended to mislead the public about e-cigarettes. The implication from CDC is that e-cigarettes were somehow responsible for the subject’s illness, despite the clear statement that ‘Kristy’ continued use of combustible tobacco products.

Mr. Rego’s image (Fig 2) was republished by Not Blowing Smoke via our social media channels and other individuals used the template created by Mr. Rego to express their own views. The image noted in the paper was created by Geoff Brathwaite (Fig 3), who has no formal association with NBS. One such image was created by NBS founder Stefan Didak in his individual capacity and several dozen individual consumers who were able to cease combustible tobacco use as a result of vapor products. As these images were created and shared prior to NBS’ incorporation date of August 4th, 2015, the assertion of an advertising campaign created by NBS is blatantly incorrect.

Further, despite having immediate and direct access to one of the most respected law schools in the United States, the paper fails to recognize that works of the United States government do not qualify for copyright protection . All the same, we believe the transformative works created by individual consumer advocates fall squarely inside the bounds of fair use. The images utilize less than 3% of the original source material, are wholly intended to provide both criticism and commentary and do not use the CDC logo. The paper willfully ignores United States copyright law while simultaneously praising identical efforts by the tobacco control industry and calling for censorship of dissenting viewpoints.

The paper also alleges that “NOTBlowingSmoke is an advocacy group for e-cigarettes, with close ties to the e-cigarette industry. Their website lists four creators, including an e-cigarette company marketing manager (Apollo) and vape store employees.”

In effect, by stating that one current Director is an employee of Apollo, the study authors demonstrate a more comprehensive understanding of the persons involved in the leadership of NBS, yet fail to cite their evidentiary source(s). NBS was created in March 2015 by Stefan Didak with assistance from Jason Downing, two of the three current board members. Neither Mr. Didak nor Mr. Downing has been employed by the e-cigarette industry in any capacity whatsoever.

To reiterate, a two-thirds majority of NBS’ Board is controlled by consumers without industry ties and the organization acts with complete independence from any e-cigarette manufacturer, retailer or wholesaler. Camille Winans volunteers her time and does not act in a decision-making capacity. Unfortunately, the authors made no attempt whatsoever to contact NBS prior to publishing and instead relied on false assertions unsupported by evidence. For the above reasons, the paper demonstrates a bad faith effort to defame and libel Messrs Didak and Downing and Not Blowing Smoke as an organization under the guise of legitimate research.

It is our opinion that this paper falls far short of both BMJ and Stanford’s long history of producing and publishing fine research both in the tobacco control field and many other areas of medicine. Due to myriad inconsistencies, significant factual errors and material misrepresentations, Not Blowing Smoke requests that this paper be retracted in its entirety.